For the London Fire Brigade Museum and the BBC, PastPorte recently took on the brief to create a context for the BBC’s 360 Fire rescue reconstruction film, viewed through a VR headset.

Until you’ve put on that headset, VR experiences are hard to grasp, and even harder to envisage. Some kind of physical installation, housing the VR, can be a focal point and a tangible tease, creating some of that rollercoaster queue anticipation that enhances the whole experience. And something familiar (less alien than a VR headset still is to most people) becomes a kind of a guide rope to take the newbie VR viewer from the real world into the virtual one.

VR is best viewed sitting down. It’s just darn right dangerous to be swaying around following the motion suggested by the content in your headset. Also it helps reduce motion sickness. So a low, sturdy, 360 degree -swivel chair is a must.

The story that features in the BBC’s Fire rescue VR begins in a fire station and follows firefighters as they rush to a house fire and go inside, to the heart of the fire, where six sleeping children await rescue. It’s as unnerving – watching the flames lick around you, trying to peer through the smoke – as it is powerful. But an urgent fire rescue doesn’t involve much sitting down. Except – in the fire engine. So – we figured we need to build a fire engine cab. 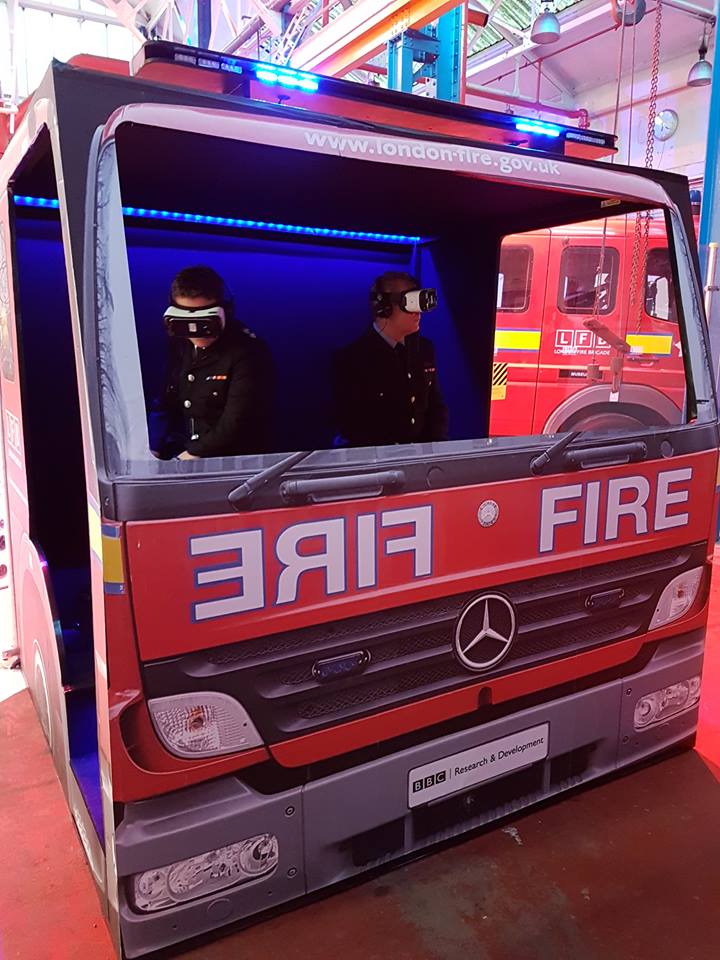 In fact we built an MDF box with an open windscreen-type front and ‘doorways’ on each flank then plastered it with a life-size fire engine picture, complete with flashing blue lights. It looks great. It draws the eye, it’s great fodder for selfies and it’s easily accessible.

But it delivers on other levels too. It’s a safe space where viewers (and their bags) are separated from the crowds. It has enough leg room so that when you take full advantage of the 360 film and seat, you don’t have that awkward moment of bumping knees with a stranger (blindfolded!) And to observers it’s obvious what is happening in the space. And when headset-wearers wave their arms, gasp or gape open-mouthed, it makes for great, share-able pictures.