If any historic attraction has been a pioneer in immersive storytelling over the past decade, it’s ss Great Britain. So we were delighted to be asked to design a soundscape for the ship’s new steerage experience.

The brief was for visitors to step back into the 1850s as soon as they stepped into steerage, to experience 5 minutes of life onboard during one of the ship’s passenger voyages to Australia. Working in collaboration with films@59, we built this sense of realism from a series of individual, specifically located sounds. Each speaker, connected to a solid state media player by carefully hidden cables, represented one passenger, located in that space, or a specific sound event. 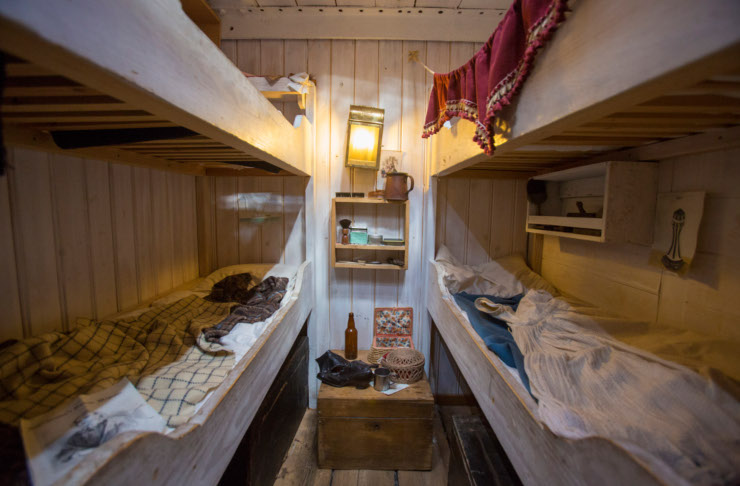 So visitors exploring steerage would be surprised by intermittent sounds from the cabins – the cries of a newborn baby and the gentle soothing of his mother, the giggles of children playing and an occasional cough, snore, sneeze or seasickness-induced retch. And some of those sound effects would be triggered by visitors’ actions – an elderly curmudgeon banging his cabin wall in irritation as they walked past, or the hushed voices of two women gossiping as they approached.

An ambient soundtrack of crashing waves was added to create the illusion of the ship being at sea, interspersed with the occasional clatter of luggage (and the odd squeak of a rat) when a particularly big wave broke against the hull.

The steerage soundscape has been running since July 2016. The overall effect is amazingly satisfying and, if you’re exploring by yourself, more than a little spooky. Its success goes to prove that the best immersive experiences are very simple – you just need to give your visitors’ senses a little nudge and then let their imaginations do the rest.