‘Looking into the Past’ for ss Great Britain

At their new Being Brunel attraction, the team at Brunel’s ss Great Britain had worked tirelessly to re-create both Brunel’s Duke Street office in London and his dockside office in Bristol. All the fixtures and fittings had been painstakingly re-constructed from contemporary paintings, even down to using a draftsman to re-create Brunel’s drawings of the iron-clad vessel’s propeller-driven hull. However, one thing was ruining this magical time travel experience – the views through the windows.

Instead of a sweeping vista across St James’s Park towards Buckingham Palace (from Brunel’s Duke Street office) or over the working dockside towards the Victorian timber yard and gasworks (from the Bristol dockside office), visitors were greeted with views of modern apartment buildings. These early 21st century vistas needed to be replaced with something authentically mid-19th century and the desire was to create something so realistic that visitors would – if only for a few seconds – believe it was real. 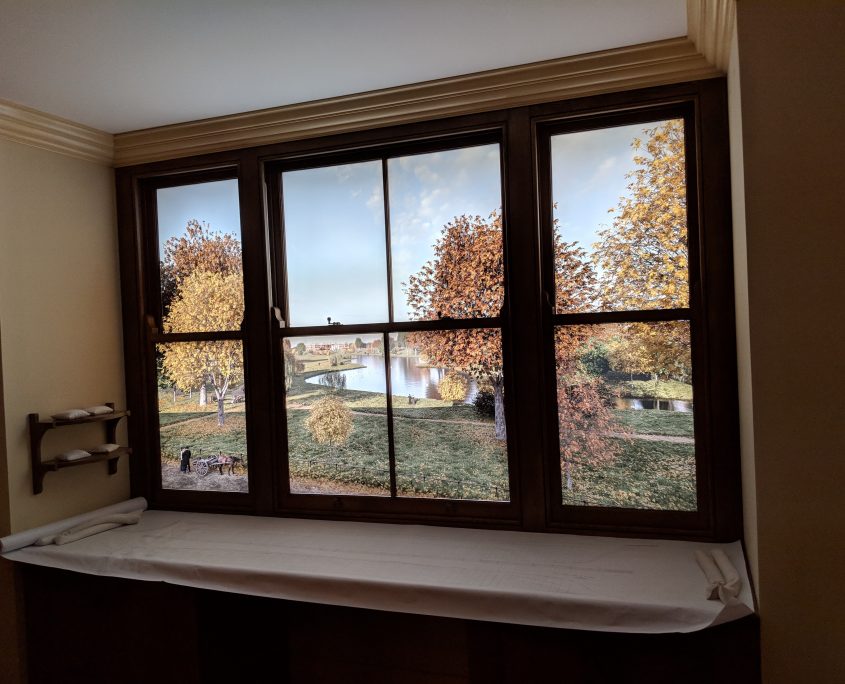 Creating photo-realistic heritage views isn’t easy. But, with a combination of detailed historical research and the latest 3D software used in the film and games industry, it is possible. For both windows, we combined our own research with that of the team at Brunel’s ss Great Britain to construct the basic ‘building blocks’ of each view.  Then we used a team of skilled 3D artists to render each asset – from the distant Buckingham Palace and Marble Arch viewed across the pelican-dotted lake of St James’s Park, to the smoke-stained, ship-filled dockside of 1840s Bristol.

Once complete, each view was printed onto lightbox vinyl and applied carefully, pane by pane, to the windows. The backlighting was provided by the light outside, so each view brightened and dulled according to the weather, adding to the realism. Add subtle soundscapes, with speakers located close to the windows and sound levels carefully set to create a sense of those sounds coming from outside, and visitors really were transported back over 150 years.

Both views have become quite the talking points for visitors to their respective rooms. It’s not surprising really – it’s not often you get the chance to peer directly into the past.