In the late 1940s, the US Air Force had a problem – its pilots were crashing and they didn’t know why.

They discovered the problem was their cockpits. Designed to fit the average sized pilot of the 1920s, a study to establish the new average of the 1940s revealed that there was no such thing. A pilot might be average height but then have arms or legs (or both) that were well above or below. And so ‘adjustable’ was born.

The learning team at IWM Duxford wanted to tell this story at the American Air Museum, creating a series of STEM related activities for families that were educational and fun.

We worked on the narrative with them – suggesting putting the participants in the role of air accident investigators trying to establish why the pilots were crashing.

Once families had successfully solved this challenge, they had to test out the new ‘adjustable’ theory. To enable them to do this, we designed and built a replica cockpit, based on the iconic A-10 ‘Warthog’. Built into the cockpit – in positions that corresponded with the controls (including the rudder pedals) – were a number of arcade buttons. These would light up in a random order. Once tapped by the player, another random one would light up – like a Batak reaction machine. 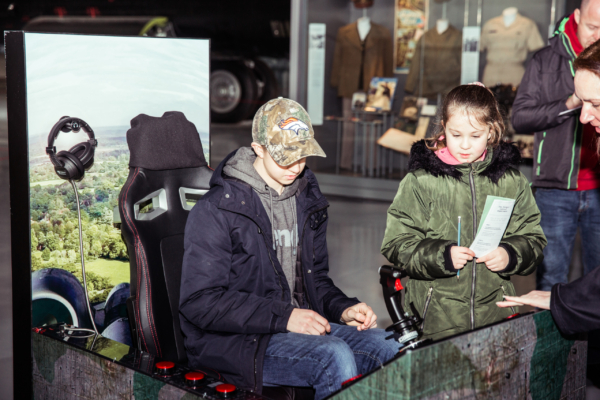 The players would climb into the cockpit with the seat set to ‘average’ and then tap as many lit buttons as they could in 30 seconds. They’d then measure themselves using our bespoke measuring machine – a single device that could measure height, arm length, foot length and hand span – before trying the cockpit reaction challenge again. With the seat now in the optimum position, their reaction times, and their score, would increase.

‘Cockpit Control’ launched in December 2019 and was a big hit with kids and their parents, proving that learning about subjects like maths (quantities and measurements) and science (reaction times) doesn’t need to be dull.