Putting on a Puppet Show for Delapre Abbey

Many attractions would love to put on a puppet show. It’s a great way to add value to your attraction, boost your word of mouth and attract a family audience.

Problem is, putting on a puppet show can be a difficult. If you use an outside supplier, its additional outlay every time you do it. And it’s unlikely the story they’re telling will have any resonance with your attraction. But putting them on yourself is a significant challenge.

However, one client of ours – Vikki Pearson at Delapre Abbey – approached us with a creative solution to this particular problem. What if we recorded the voices with professional actors so her volunteers only had to operate the puppets? Then, they’d just need to press ‘play’ at the beginning of the show and move the puppets at the appropriate time – much more straightforward.

We took the outline script that Vikki had written – The Heir of Delapre – and turned it into a three-part play. Each 10-minute playlet worked as a story in its own right but also slotted together into a greater whole. If would give people an excuse to dwell to catch more than one episode, or to come back again in the future to see more. 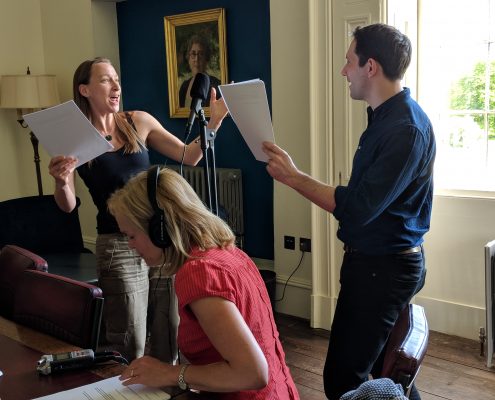 As two volunteers would operate the puppets, we only used two (versatile) actors to voice all the parts. We carefully worked out where each puppet would be positioned – stage left or stage right – and made sure the voices came out of the correct speaker. We built lots of opportunities for audience participation into the scripts – cue cards for ‘ooohs’, ‘aaaahs’ and ‘shames’ and plenty of sound fx for audience members to operate (door knockers to knock, newspapers to rustle etc).

To ensure everything worked smoothly, we created simple instructions for each volunteer to follow so they knew what to do when and we also ran through each performance with them, making tweaks to the audio and the instructions based on their feedback.

Delapre Abbey now has not one but three puppet shows, and a willing queue of amateur puppeteers happy to help now that they don’t need to worry about ‘doing the voices’.

If you’ve been inspired by the above to put on your own show and need help with stories, scripts, recording the voices or whatever then just call us on 01242 256970 or drop us a line.