Once the most technologically advanced ship in the Royal Navy, HMS Belfast is packed full of STEM learning inspiration.  The ship’s learning team wanted to use some of those resources to create an educational and, most importantly, fun trail for KS1 and KS2 children.

We were commissioned to work with them on the trail narrative, to refine their ideas for activities and physically build the interactives.  Tea Films worked on the accompanying video content – an initial briefing delivered by Lieutenant Shires (Ben Shires of CBBC’s Officially Amazing) and a ‘well done!’ debrief at the end of the trail.

Together, we came up with the concept of Sea Legs, putting the trail’s young participants in the role of new recruits earning their spurs. Their mission was to help Lt. Shires discover the destination for the ship’s first voyage post refit in 1943 – the coordinates he’d been given had, of course, been stolen by a passing seagull…

The three activities we devised with the learning team all concerned STEM topics, but also gave children insights into life on board – and, of course, vital clues to where the ship was headed next.

A Navy Sails on Its Stomach challenged participants to weigh replica food items and tin cans that represented three possible menus for the voyage. Only one menu would add up to the correct weight. This not only familiarised children with differing weights – part of the maths curriculum – but helped to teach them that the colder the climate, the heartier the food on the menu (and that ‘tinned tongues’ were considered a delicacy in 1943!)

For the Roll with the Waves activity, we created a balance board designed to help the new recruits learn to roll with the pitches and yaws of the ocean. By shifting their weight on the balance board, the children manoeuvred a ball around a built-in maze. By positioning the ball alongside three sets of connectors, the players completed an electrical circuit and illuminated 3 letters. These letters revealed what the Sick Bay used to prescribe for sea sickness (something much tastier than Joy Rides). 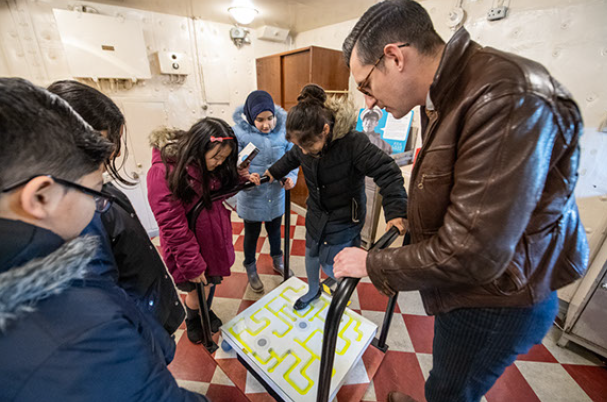 The final activity tested the participants’ reasoning skills, challenging them to identify the kit bag and ditty box of Ron, the ship’s radio operator, based on the clues they’d received from the first 2 activities.  Ron’s ditty box contained a map of their planned destination.

Sea Legs launched in December 2019 and received excellent reviews from the parents and children alike. Topics that many children would have found a little dry and dull were successfully delivered in an engaging, relevant and entertaining way.

If you’d like us to create an learning trail for your museum or exhibition, just call on 01242 256970 or email ben@pastporte.co.uk.